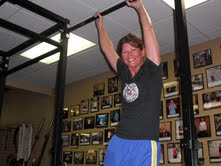 Trish came to NPF looking for someone to create a running schedule to improve her speed.  After running several races on her own with average results, she was curious what she could actually do if she trained.  Her goal was to place in her age group in both a 5K and 10K race.  Not only did she place first in her age group in the 5K and 2nd place in the female masters category for a 10K, but she has more energy than she knows what to do with.

Trish signed up to run a half marathon to raise money for the Leukemia/Lymphoma Society in November,
2007.  She had not run a mile in over ten years. She ran the race without much difficulty after doing the 8 week running schedule.  In 2010 Trish tried another half marathon with her own training schedule.
It was at that point that she wanted to train and see what kind of results she could get.  However, that plan
was interrupted by a torn ACL.  Following surgery and three months of physical therapy, Trish arrived at NPF and the rest is history.